Puran Poli is a Maharashtrian dish. The Poli is in itself a delicious sweetmeat and is often eaten as such. It may be served with a spoonful of ghee. Poli is often served with milk, which may be sweetened or flavored with almonds and pistachio. In certain areas, polis a tangy, tamarind-based sauce (similar to the base of pulihora) is served with the Poli  to enhance the experience by combining very disparate flavors  In Maharashtra, the tangy sauce is called katachi amti.

In Goan cuisine and the cuisine of the Konkani diaspora in Karnataka and Kerala, punn-poli or Holgi, is generally served with coconut milk flavored with nutmeg and sweetened with jaggery.
In other parts of Karnataka, holige or bele obbattu is served with ghee and hot milk. A variant of the bele obbattu is the crunchy kai obbattu that is prepared with jaggery and coconut. This is usually eaten dry with ghee.

In the Vidarbha region of eastern Maharashtra, the puran polis are soft, since the stuffing is made with jaggery. In western Maharashtra, the powdered white-sugar version is preferred, resulting in a crunchy puran pol . It is a dessert served during auspicious occasions and during important festivals such as Holi, Padwa in Maharashtra. Although it resembles like a roti, a poli is actually very different. It is made mostly during holi when the bonfire is lit.
The method of preparation varies from place to place. Sometimes grated coconut is added in Konkan. Coconut palm jaggery may sometimes be used. Similarly a mix or sugar and jaggery both can be used as a sweetening agent. Normally nutmeg is used as a flavoring agent along the coast which is replaced by cardamom or sometimes both elsewhere.
Methods of rolling the stuffed dough may differ too. Normally, it can be rolled using rice flour which makes the rolling very convenient. On the other hand, in some recipes flour is not used at all, oil or ghee is used to roll it into a flatbread instead. The rolled bread can be roasted with our without any ghee or oil, which sometimes is smeared after its completely cooked 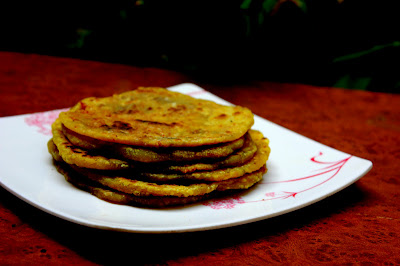 Wash and boil chana dal.
Drain and coarsely grind it.
Prepare Jaggery Syrup, using water and Jaggery
In a pan add the dal, jaggery Syrup, saffron, cardamom powder and mix well.
Cook, stirring all the time till dry.
It should resemble a soft ball.
Remove and cool.
Divide the stuffing into sixteen to twenty equal portions and roll into balls.

Mix maida and salt along with a pinch of Turmeric powder
Add sufficient water to make a soft dough.
Cover with a damp cloth and keep aside for one hour.
Divide dough into sixteen to twenty equal portions and roll into balls.
Flatten each ball in your palm, stuff with one portion of puran (stuffing), cover and seal the edges.
Dust it with flour and roll out into four to five inches diameter disk of medium thickness.
Heat a tawa and cook puran poli until done on both sides.
Remove. Serve hot with generous helping of pure ghee on it. 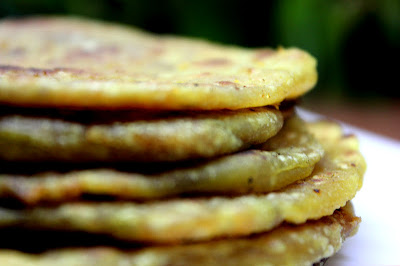 Kamalika , u know more than I do about puranpoli :) these are favorites at home and made often, like u said with sugar( iused a combination of jaggery and sugar though)

Same dish different names right, nice to read how this served in diff places. And your plate surely looks tempting.

Most favorite of mine....

Love it in all its variety!!

Delicious puran polis. I also made these for this week. Will be posting mine in couple of days.

All time favorite. We use to add brown sugar instead of syrup.

Its a all tim efavourite. Love your pic.

I had this in Pune the first time at a Maharashtrian friend's place. She served it with some dal water I guess. The flavors just come in bags full. Love it.

Though this is one of our traditional dish, I haven;t posted it on my blog.
The last clicks looks yum.Nice one Kamalika :)